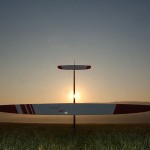 We had great luck with the weather and excellent help from the participants.

Watch this space for results, a more detailed report and pictures.

Robert Turner took these flying over the field. Thank you, Bob!

We had a B-2 fly-by on Saturday. These pictures were taken by Dev Devreaux at the New Garden airshow – thanks to Dick DuPont for sharing and to Dev for allowing us to post them. Dev is an architect and accomplished author – check out his book on Amazon.

This video from YouTube was taken at the airshow:

Robert McCoy took these pictures with his iPhone:

We had 25 pilots on Saturday ( 15 Experts, 9 sportsmen, 1 novice) traveling from as far as New Hampshire. One of the participants, Reto Fiolka, a native of Switzerland, is very well known in F3B circles. He seemed to enjoy American style thermal duration competition. He and Mike Mike Lakowski put on an impressive F3B demo after the contest with speed times in the 15 second range – you had to be there! The contest went smoothly thanks to the help from all the ESL guys. We had winds from the south at < 10 mph. The temperature was not as gruesome as two years ago but we hit the high 80s. We flew seven rounds with a very competitive field. In an effort to avoid thunderstorms, we had the pilots meeting at 8:15am on Sunday. 21 pilots participated. We finished six rounds in 90 degree humidity with winds from the west at < 10 mph before lunch - including birthday cake! The participants commented on having had a great time and looking forward to next year. We'll see you back at our field in 2011, if not before!