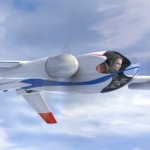 The Puffin is designed to stand on its tail, which serves as the landing gear (check out the video). Once the Puffin transitions to horizontal flight, the pilot can cruise at more than 140 miles per hour. Hit the boost mode and this bird will do nearly 300 mph. The projected range is 50 miles on a charge. Yeah, that’s not much, but using electricity means the Puffin’s powerplant won’t be limited by air density. NASA says it should be able to climb under full power to around 30,000 feet before the battery pack would be depleted enough to require coming back down.