I want to thank everyone who came and flew at our contest. We had a light turnout (11 on Saturday and 10 on Sunday) but everyone had fun and flew a lot so that’s what counts.

From my point of view as CD the contest was chaotic and I ran around all day stamping out brush fires and making sure everything went as planned. But that’s what the CD does and I didn’t get much of a chance to observe the action. On Sunday it was a “bit” windy with winds out of the north at fifteen with occasional gusts to twenty. Twenty is the limit for an HLG contest but we never stopped flying. Nevertheless the good pilots, as always, were making their times. On Sunday the wind died but unfortunately so did the lift. We had light lift all day but I still think it was easier without all that wind. I don’t think anyone can complain that they didn’t fly enough. On Saturday we flew until 5:30 and on Sunday I promised not to start any rounds after 3:00. True to my word, the last round on Sunday started at 2:57. I’m a taskmaster but no one complained, they came to fly!
I need to thank some of our members for stepping up and lending a much needed
hand. Walt Leipold was an able second-in-command and a computer trouble shooter
without equal. I’m just glad we didn’t have to pay his hourly rate! Ray Plepys and Jim Cannuli helped with the setup and jumped in wherever help was needed. John Bitzer volunteered to go and pick up lunch on both days which is a much bigger help than it sounds. John Kirchstein and Gerald Terfloth
both showed up with cameras and took a lot of pics to help document the proceedings. If there is anyone I’m forgetting you know who you are and thanks to you as well. The real hero (or heroine) of the day was Walt’s wife, Sharon. She was volunteered for the critical and thankless position of score keeper and excelled at it. She’d never seen the “F3K Score” program that we use but jumped
in and by the end of the first day she had it mastered. On day two we just got
out of her way. Thanks Sharon! Now we have to figure out a way to get her to do
it next year.

And we are going do it again next year. We’d like to see more SKSS pilots sign
up and fly, so get a hold of a hand launched glider and start throwing it.
You’ll have fun.

Some pictures from round one on Sunday. Beautiful conditions! Walt and Eric did a wonderful job running the event. 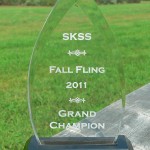 There is a great thread on RCGroups about the contest. Eric wrote this:

What can I say but thanks. Thanks to the competitors who came from afar and the volunteers who pitched in and and lightened the load. I’d especially like to thank a few of the many SKSS club members who helped (and this is just a partial list), Walt, Jim C, Bill J, Newt and Robert M.

Also a shout out goes to Robert Ashinsky (the other Ashinsky) who said in advance that he would help, but not that he would help so much! He pitched in to such an extent that I was able to fly in the same contest I CD’d, something that is not usually possible.

Also Frank Nisita. He gave me some great advice for a newbie CD and put up with a huge amount of taunting during the Pizza Slap Down smack talk. I also have to point out that his wife was everywhere pitching in. She did it quietly and without fanfare but her help was noticed and appreciated. Hey Frank, thank her for me!

Reto has pointed out the Expert winners, but the winners in Sportsman are:

Also on Saturday we had a new guy who’s only been flying HLG for a few weeks Chris Ungermann, who took first in Novice. Never mind that he was the only Novice, it took guts to come out and mix it up with the big boys.

The overall Champion and winner of the coveted Acrylic Beauty: Phil Barnes

The weather was not as forecast (is it ever). On Saturday it was overcast with light lift and sporadic light rain. Sunday started out overcast and COLD but eventually the sun broke through and it got windy. Plenty of lift on Sunday but the wind made it choppy. Much sermaling was done at the local tree line. A few off field landings but I didn’t see anyone climbing a tree so I think the carnage was kept to a minimum.

My best flight of the weekend came on Sunday during the AULD. Just before the third launch everyone in the Group started moving toward the north end of the field. I looked up, checked the wind direction, sniffed the air temperature but still didn’t have the slightest clue as to what was going on. After the launch the whole group headed north with me in pursuit, still not knowing why. I soon found out. I ran into a small thermal, that became a big thermal that ended up as a monster thermal. My glider was swept up and I easily made my three minutes. After that flight I had a huge smile on my face.

So, thank you all. I’ll let the others elaborate on their experiences and will end by posting some pics (and encourage others to post pics as well).

Until later, tailwinds and green air to you all!